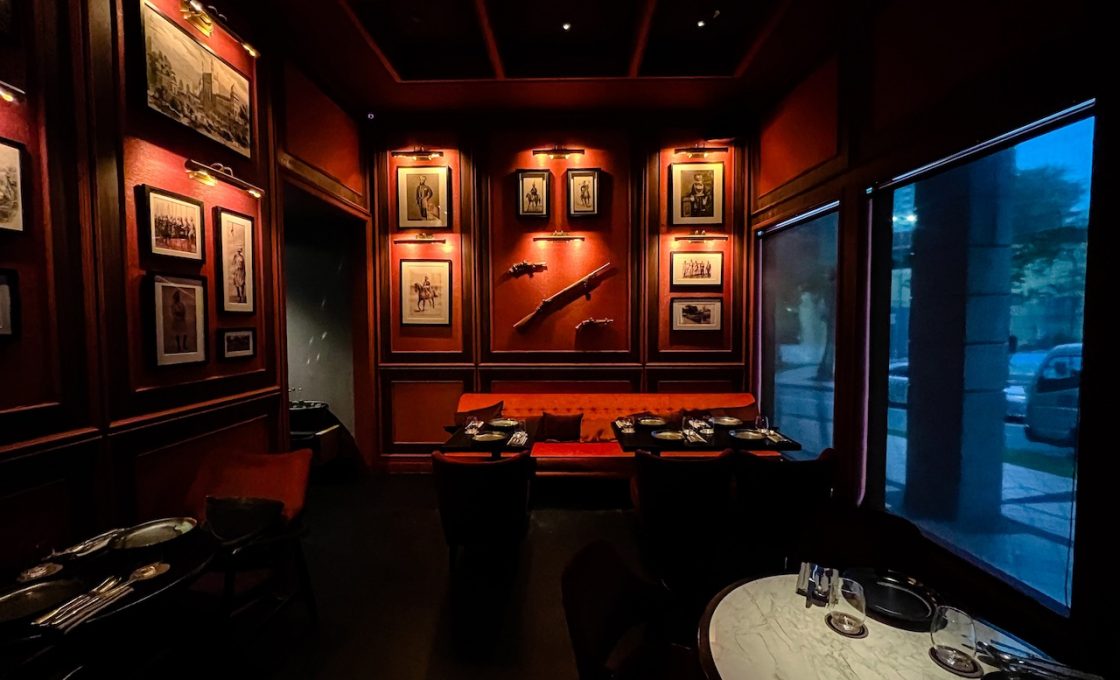 Firangi Superstar is an Indian fusion restaurant on Craig Road that took up the premises that previously housed Trattoria Pizzeria Logic. They’ve been described as a “Foreigner’s Love Letter to India”, and I had been curious for ages to try this place out.

Ambience, Service and the Staff

Firangi Superstar sports a minimalist but vibrant exterior that gives way to a very stylish interior. Different sections of the restaurant are decorated to theme reminiscent of colonial India. We were seated in a private room that was decorated to look like the interior of a colonial era train car, complete with luggage racks! We were a party of 8 and made reservations over the phone.

We visited them on a Tuesday evening at 7pm. The restaurant was at about 30% capacity and would eventually fill up to capacity by the time we were done. The staff were friendly, attentive and efficient offering us water as we got seated, and kept our glasses full throughout our meal. Menus were provided at the table and are printed on paper that makes them resemble an old newspaper that you would typically find in India.

The menu is divided into small plates and big plates, and there were a series of cocktails and drinks on offer. We started with some drinks ordering the Elderflower Caesar Ritz, the Saffron Vodka Sour, the Cashew Mai Tai, the Fenugreek Manhattan, and the Zero Proof Cashew-Pineapple Lemonade, and followed up with a selection of starters – This is not Aloo Gobi, She’s So Pyaza, a Mattar of Burrata, the Prata Waffles and the Hunter. We augmented these with two large plates of the Back in the Saddle, and the Rogan Josh, with a selection of Garlic Naan, Steamed Rice and Brussel Sprouts on the side.

Drinks came out within 5 minutes with the starters following about 5 minutes later. They were all presented in some interesting looking glasses that added to the fun atmosphere.

We were totally amazed at the quality of the food. The Aloo Gobi was a head of cauliflower served on mashed potatoes with a spicy twist. The Burrata was a western take on mattar paneer with a light honeycomb accompaniment that added an interesting texture. She’s so Pyaza was crispy fried Okra and was heavenly. The prata waffles were a chicken-65 served on a section of waffles topped with some curry leaf that was really good! The Hunter consisted of a pork vindaloo on a stuffed Indian bread that was amazing. We were just getting started here, as the two big plates arrived.

The Back in the Saddle was rack of tandoori spiced lamb that was cooked to perfection and served perfectly. The Rogan Josh was a serving of sliced beef that had been seasoned with Kashmiri chilli.

While all of the items were full flavoured, none of the them where overwhelmingly spicy that made for a perfect meal.

The portions of naan were quite large, the rice was ample, and the brussel sprouts (which took a bit of time) had a sweet tinge to them offset by a little charring.

The portion sizes of the starters and mains were not huge but were ample as we shared among our party of 8.

For 8 people, including beverages, we paid just over $750 which is a bit pricey.

At close to $100 per person, Firangi Superstar is not the sort of place that you’d go to every night, but it’s the sort of place you go to really enjoy an amazing meal with a unique taste and environment. I have since recommended this to a lot of colleagues at work and will be going back again. This is a great place for a first date, celebrating special occasions with family and friends, or business meals.

Birds of a Feather