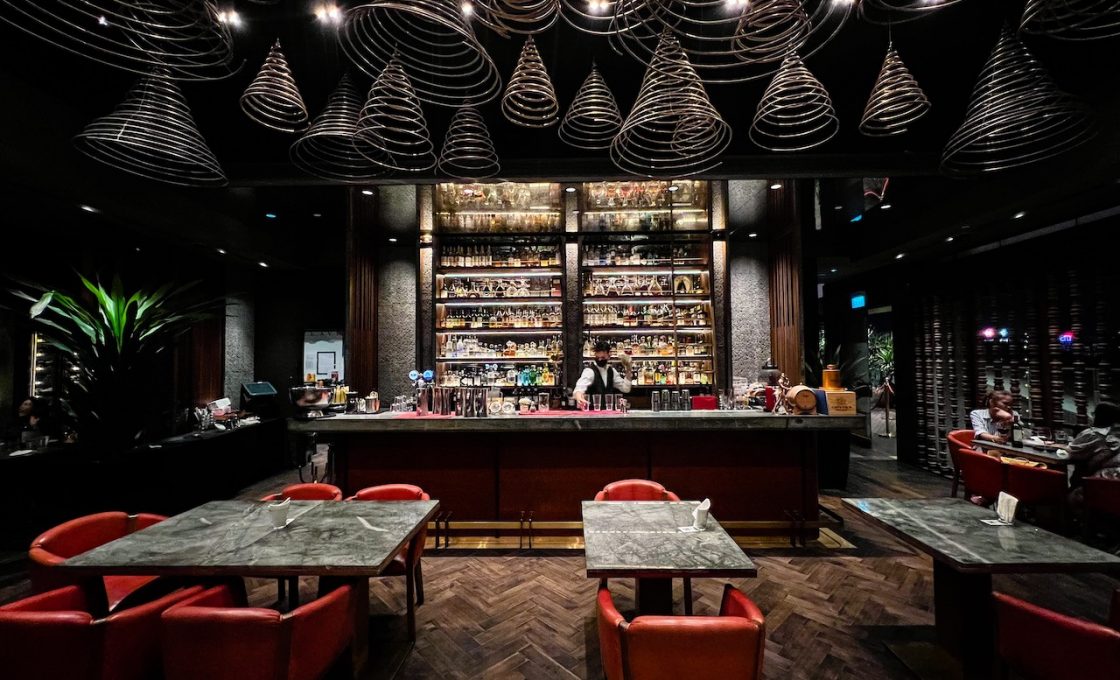 We were celebrating an Anniversary. This called for a special place, and Ce La Vi seemed to fit the bill.

As Singapore continues to emerge out of Covid-19 restrictions, we were continuing to support our F&B establishments.

Entrance to Ce La Vi is through a dedicated elevator at Tower three at Marina Bay Sands which quickly took us up to the 57th floor, where we were greeted by the friendly staff, led us to our table. The alfresco area caters to guests who may wish to smoke (there is a smoking area at a distance). The restaurant has a slightly elevated level near the bar, and a level that’s a little lower down which extends to seats by the windows. It is decorated in the theme of an Asian temple, with columns that look like incense sticks.

We were a party of 2 and had made our reservations via their website. On the evening, the restaurant was fairly busy, operating at about 80% capacity. It took the staff about 10 minutes and two requests before they served us with water. Menus were on the table via a QR code.

We ordered the burrata for starters, followed by the codfish and the barramundi as our mains, accompanied by the eggplant to share. We also ordered a cocktail – a Happy Afternoon.

The drink came out first – generous in size and thoroughly refreshing. The burrata followed a few minutes later and is served with a portion of furikake focaccia which was divine. It had a soft, spongy texture and had a dried, crispy topping that tasted like the sea.

Our mains arrived shortly after. The staff kept an eye on our progress with the starter and brought it out just as we finished it. Both fish dishes were really good. The cod fish had been cooked to perfection and had the signature oily taste to it. The barramundi comes with spicy squid on top which I’d ordered on the side (I’m never too sure about how I feel about sea food). After tasting a little, I promptly put it back on the barramundi where it was supposed to be – that was how good it was! The Binchotan Eggplant Bakar was our favourite dish of the night. The eggplant was cooked to perfection, slightly spicy, and offset perfectly with the cashews.

Our meal for four came up to just under $200. This is more or less the amount that you would expect to pay at a fine dining restaurant at Marina Bay Sands. My Sands Rewards membership gives me 6% back in points that can use during future visits.

Ce La Vi is a place for special occasions. It offers great ambience and an amazing selection of food. It’s the place that you’d take a special someone out on a date, or celebrate special event in life, or just hang out with friends on a night when you decide to treat yourself to a special meal. We felt that on the night, their service could have been a bit better, and for the price point, we have had better experiences at other similar restaurants at Marina Bay Sands. That’s not to take away the fact that it’s a really good restaurant, and one that I would go back to again, and would also recommend.