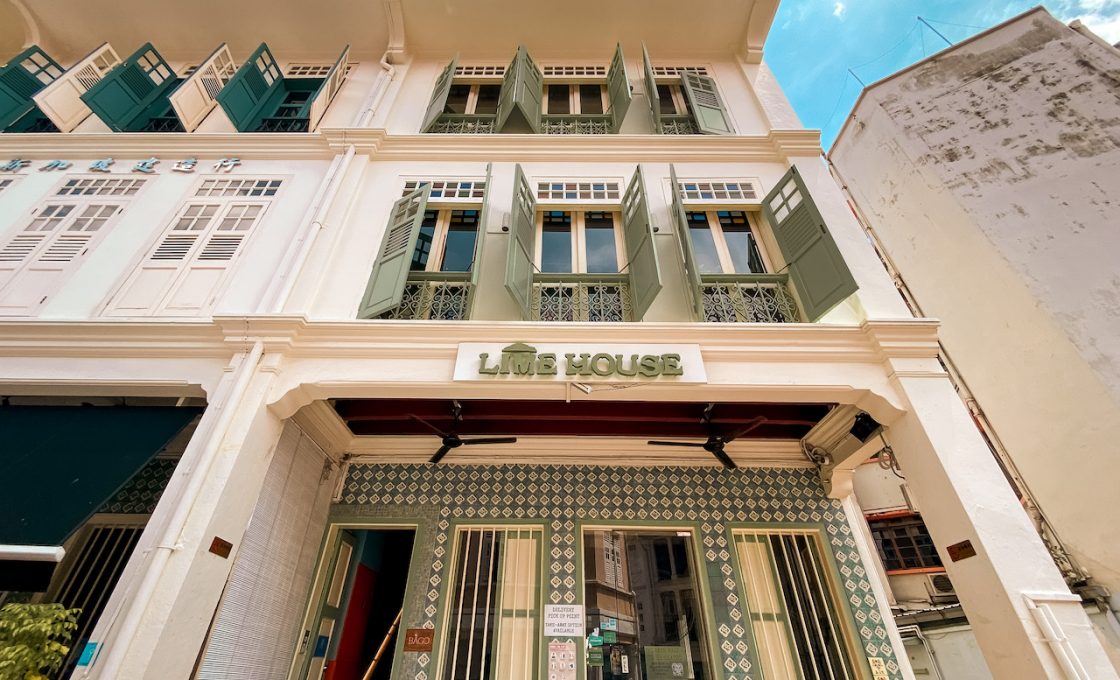 Jiak Chuan Road in Tanjong Pagar has a collection of some amazing ethnic restaurants. I’d previously visited Kafe Utu and Bao Makers here, and while passing by, had spotted Lime House which I had made a note to visit. Last night, I got around to visiting with some friends.

As Singapore continues to emerge out of Covid-19 restrictions, we were continuing to support our F&B establishments.

Lime House is housed in a restored heritage shop house, decorated in bright green tiles outside. The interior is a throwback to a colonial era, with wicker lamp shades, an off-white and green palette, functional restaurant furniture, and a preserved lattice archway that splits up the interior dining area. The restaurant also has an outdoor alfresco area in the back, and high coffee tables in the alfresco area in the front.

They’re open for dinners on Tuesday through Friday nights, and for lunch and dinner on Saturdays.

We were a party of 4 and had made our reservations via Chope. We were quickly seated by the friendly and professional staff and provided a menu and water. The restaurant was very full on a Thursday evening.

Food here is best shared. We ordered the Doubles, the Fried Plantains, and the Hot and Spicy Eggplant from the Tapas menu, and a half serving of Baby Back Ribs, the Vegetarian Pelau, and their Signature Jerk Chicken for our mains. We also ordered a Sage Colada cocktail, and a glass of Cabernet Merlot.

The cocktail came first – though it took a while. Food started arriving about 15 minutes after we had placed our order, starting with the Doubles – a pair of flat bread bases with a curried chickpeas which tastes a bit like Indian Puri and Chole. The fried plantains and the egg plant followed. The plantains are something that I personally found very pleasing. Their sweetness is delightful without being overwhelming. The eggplant was covered in a crispy shell that flakes as one bites through it.

Both mains came with sides of sweet potato fries. The jerk chicken is very Caribbean in the culinary sense. It has a blend of spices and a full-bodied flavour. The meat is cooked perfectly and falls apart as you begin chewing. The half rack of ribs has a sweet barbecue flavour, with the meat being tender and juicy without being overdone.

We were left with enough room for dessert and went with the Spiced Banana Cake, the Guava Cheesecake, and the Mango Coconut Panacotta.

The Cheesecake and Panacotta came out first. Both were beautifully presented. The Panacotta was served with a cream filled puffed pastry. The guava cheesecake has a very disinct flavour quite different from anything that I have ever eaten before. It is served with slices of poached guava. The Spiced Banana Cake was, in my opinion, the best of the three. The cake had been freshly baked and was hot, served with a side of ice cream that provided a lovely thermal contrast. It was accompanied by a couple of pieces of plantains.

Our meal for four came up to just over $235. It’s a tad pricey, but totally worth it. We had Chope vouchers which brought the price down a bit.

Lime House is amazing! This is a restaurant that offers great atmosphere, great food, and great service. Great for meeting friends, for romantic dinners with your significant other, or for celebrating. We loved the food. The portions were decent, and we were well looked after throughout our visit. I will definitely be coming back here.